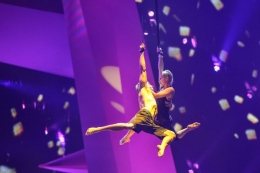 The Eurovision Song Contest has been an annual highlight on Europe’s entertainment calendar for 54 years. The 2012 edition was characteristically spectacular and took place at the newly constructed Crystal Hall in Baku, Azerbaijan. The facility is a brand-new, multi-purpose indoor arena with capacity for 23,000 spectators. International attendees filled every one of those seats during the three live Eurovision shows in May.

The elaborate opening ceremony was a close collaboration between Italian and Azeri artists. Simmetrico Milano managed the concept, the creative and artistic direction, and the production. The opening act required complex rigging and choreography to enable the performers to ‘fly’. To achieve a realistic flying effect, the organisers asked ZFX Europe to provide its equipment and expertise.

It was not simply a case of programming automated hoists based on story boards; specialised flying directors were required to flesh-out the artistic director’s vision and turn it into reality. This also needed to be done in a relatively short amount of time. Flying directors must create a strong bond between the performers and operators. Like dance partners, they must be able to anticipate the other’s movements and, if a misstep occurs, adjust the choreography accordingly. The hoist only moves the performer; it is the interplay between the operator and the performer – their chemistry – that creates a realistic flying effect.

During the preproduction stage it became apparent that more rehearsal time would be needed than was available in the Crystal Hall, so a second, identical set of equipment was set up in the rehearsal arena. This enabled the performers and operators to have adequate time to perfect the choreography while building the strong bond they would need to bring the performance to life. A total of eight eZ-Hoists (specific-purpose performer flying hoists) were used to create the flying effect. ZFX also provided the flying directors and operators who made that movement match the artistic director’s vision.

ZFX manufactures the harnesses, as well as the eZ-Hoist, the rigging and even the black wire rope (flywire) at its research and development facility in Louisville, Kentucky. In total, 5,000kg of equipment was airfreighted in four large crates from the USA to Azerbaijan to create the effects for the show. The crew was in Baku for one month, including set-up, rehearsal, show and tear-down.