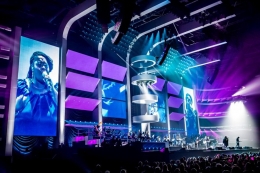 For the 2013 edition of “Symphonica in Rosso”, the design team came up with a LED backwall that had 16 rotating led panels. These panels where to turn in rows of four.

Frontline Rigging met the designers wish, and even did one better by enginering and building sixteen rotators, affectionately called LED-A-FLEX that could turn 360° and where al seperatly programmable.

To top of the design three ufo-like set pieces where added to the set witch moved up and down the whole set-up was programmed and controled by one operator, making it easy for the design team to translate creativety to programming cue’.

Although the time to set up and program was challenging the system made its mark by performing without any problem giving the team all the time they needed to get it right!