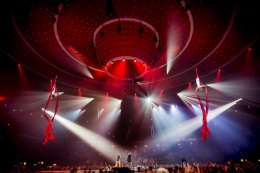 Creative vision and complex rigging technology combine to create the illusion of flight for props and performers.

Friends Of Amstel (Vrienden van Amstel) is an annual event comprising seven or eight evening shows in the Ahoy Rotterdam arena in the Netherlands. The event, which often attracts over 100,000 people, sees Dutch hip-hop artists and rock bands performing alongside well-known pop and folk singers in a one-of-a-kind musical celebration.

The 2013 show, which took place in January, was the event’s 15th anniversary, so the organisers wanted the performances to be more spectacular than ever before. As such, ZFX Europe (operated by Frontline Rigging) was asked to create a complex rigging solution that would enable the performers to ‘fly’.

Furthermore, the rigging expert was asked to facilitate a flying piano bar. This was to take flight above the audience carrying four singers, who would be sat around it.

Four single-wire eZ-Hoists (performer flying winches) were used to create realistic movements for the flying performers. The experience and expertise of ZFX Europe’s directors and operators ensured that the movements matched the visions of the artistic directors.

Because the flying piano bar had to travel above the audience, a 180m-long eZ-Track system with several curves was used. Two automated eZ-Trolley units, together with two BGV-C1 chain hoists, were employed to
transport and lift the structure. Although the piano bar was rigged on only two chain hoists underneath the trolleys, it was very stable and this gave the artists confidence in its safety. A 180m cable loom was used to feed the light, sound, video and camera equipment onboard the piano bar. The flying time would be between five and eight minutes, depending on the spectators’ choice of songs for the artists to perform ‘in flight’.

Flying colours In addition to facilitating the flying piano bar, the eZ-Trolley system was used to transport several flying objects last season. These included hot air balloons (for The Nutcracker), carpets (Aladdin), cars (for trade shows) and several LED screens (for festivals and television shows). The objects were moved by the system either in a straight line or on a curved track.

Because all automation equipment is controlled by the same system, it is simple to combine any number of trolleys, winches, track flying systems, hoists and/or turntables and lifts together, and operate them from one desk with a single operator. This means that creative directors can realise their elaborate visions without incurring huge labour costs.